So, the Eizo S2231W went back to the store (kudos to Proline.pl for a problem-free returns policy) and my search for a new 22″ LCD continued. After some more Web research, my attention turned to the recently released Dell 2209WA. According to the well-informed posters at hardforum.com, this display is supposed to be a big deal for three reasons:

Spurred by rave user reviews, I quickly found a store that carries these monitors in my city and made sure that the store would accept a return if I didn’t like the screen for whatever reason. Having spent the equivalent of $750 on the Eizo a few days before, I almost felt like I was getting the screen for free this time!

My expectations were pretty high. Everyone and their mother says that IPS panels are better than S-PVA, so despite the budget price of the Dell 2209WA, I expected the image quality to be close to that of the Eizo S2231W. I was concerned with quality control issues like uneven backlighting or bad pixels. But what was really on my mind was the text clarity: Would the Dell be as horrible as the S2231W? I hoped it would at least be in the same league as my trusted Eizo S1910.

As soon as I unpacked the Dell 2209WA, I placed it next to my S1910 to check how the text looked. I could barely believe my eyes. Not only was the Dell in the same league as my old display — it was actually better! All the letters looked sharper even after I dialed down the sharpening control (the default setting of 50 amounts to subtle sharpening; to disable sharpening altogether, you need to set it at 40).

The explanation for the difference in favor of the Dell 2209WA turned out to be quite simple. The subpixels on the S1910 are not rectangular. Their shape looks a bit like this: “>”.  On the other hand, the Dell 2209WA has rectangular subpixels, which are better suited for the subpixel rendering used by ClearType.

Here is a photo which compares the pixel structure of the Eizo S1910 with the Dell 2209WA (sorry for the slightly out-of-focus S1910 photo):

Now that the text sharpness concern is out of the way, let’s take a look at other issues: 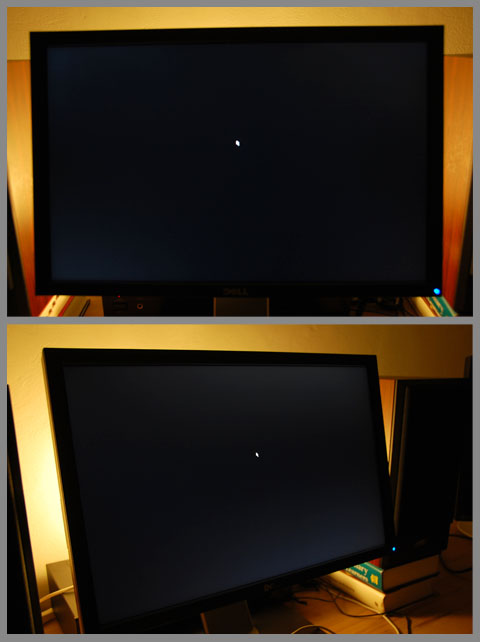 My search for a 22-inch widescreen LCD that would match my 19″ Eizo S1910 has turned out to be a disappointment. Four years after I bought that display, there appears to exist no 22″ that is good at everything: text work, photo editing, movies and games.

That said, I will be keeping the Dell 2209WA. Why? First, I’m running out of options. The only non-TN 22″ that I have not yet tested is the HP LP2275W, but since it is equipped with an S-PVA panel, I expect it to have the same ClearType defect that made me return the Eizo S2231W.