I am now afraid of browser plugins

Yesterday night I got my first malware infection from the Internet. Here’s what happened, step by step: 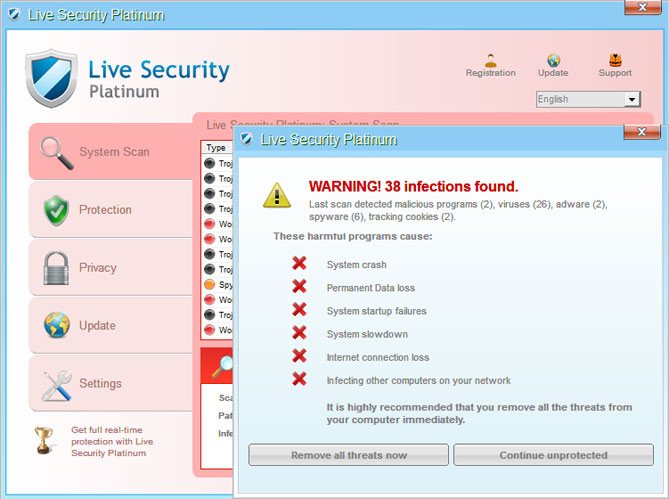 This wasn’t just one of those annoying popups that you can simply close. My PC was completely taken over by “Live Security Platinum”, which, as I later found out, is a fake antivirus which tries to convince you that your computer is infected with a bazillion viruses and get you to pay for the “full version” of the “software”. It adds itself to the Windows Registry, sends unknown data over the network, keeps displaying annoying balloons in the notification area, and when you run Task Manager, it immediately closes it so you can’t kill it. It also reconfigures your proxy settings to keep you from running Google searches to find a solution and prevents you from running certain antivirus applications. Most annoyingly, it permanently removes several crucial Windows services like Windows Update.

Why the hell were you using Adobe Reader?

Well, I had been using FoxIt Reader, but I switched to Adobe because FoxIt occasionally had difficulty rendering PDF files.

Why were you using such an old version of Adobe Reader?

Because it worked faster than the newer versions. I guess I didn’t think of the fact that old Adobe Reader versions have vulnerabilities that could be exploited by a website I visit.

How did you remove Live Security Platinum from your computer?

Well, it wasn’t easy. When I typed “live security platinum remove” into Google, all I got was a ton of shady-looking keyword-stuffed sites, all of which tried to get me to purchase or at least download some malware removal software. I literally couldn’t find a single reputable-looking resource on the topic. Not a word from McAfee, Kaspersky or Avast. How was I to know that some app called MalwareRemover or TrojanKiller wasn’t going to mess up my system even more?

In the end, I followed the manual removal instructions given here (near the bottom of the page). That way, at least I could verify each step separately.

Once the malware was removed, I was in for a nasty surprise. Live Security Platinum had removed a number of crucial Windows services like Windows Firewall and Windows Update. By “removed”, I don’t mean that it simply disabled them – I mean that they did not even appear in the Services console. How do you reinstall a basic Windows component? I decided that the simplest way out was to use System Restore to bring my system back to the state it was in 4 days earlier. Thank goodness I had a restore point that I could use.